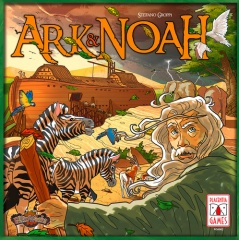 Offizielle Infos:
Ark & Noah – originally shown under the name Diluvium – is a game of strategy in which players must not only compete for points, but must also work together to build and load the Ark. Everyone shares the task of saving the animals, but in the end there can be only one winner!

In the game, the players are Noah and his sons, and they must find the animal couples and load them on the Ark before the Flood starts. In each round, they will choose which action they will take: Searching for Animals; Collecting Wood, Food or Pitch; Building Corrals in their color; or Loading Animals on the Ark. This choice also determines the round order for the next turn. Players score points by loading animals in the right corrals, possibly in the player's color. Thus, in each round there is a strategical phase (choose action) and a tactical phase (execute action).