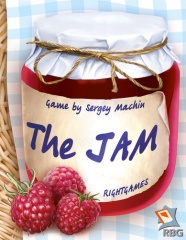 Offizielle Infos:
Ahh, jam, a favorite treat from childhood! A bright sunny day – scarlet strawberries, sweet-scented raspberries, tasty apples, still warm pink scum, the humming of bees... Or a winter evening – cold outside, warm inside, a burning lamp, tea is ready – all that's left to choose is cherry or peach? Gooseberry or currant? Why not open a few jars and taste some of each. Of and it would be lovely to bake some pies with jam...

Now you can not only eat jam, you can play The Jam. In this game you need to make all sorts of jam and bake pies. At the start of the game each player has a hand of four cards and a task sheet; the sheet shows different combinations of jam and pies that you need to make to earn extra points at the end of the game. Players receive points by completing tasks, and also for each jam they make and each pie they bake. The one who has the most points at the end of the game wins.

All cards in the game can be used as either an Ingredient (the image at the bottom of the card) or a Recipe (jam, pies or fruit salad – the upper part of the card). At the beginning of the game the top eight cards are placed on the table face up, forming the Basket with Ingredients, fruits and berries.

How do we make jam? A player plays a jam Recipe from his hand, then places the necessary Ingredient on top of it, which he takes from the Basket ("Raspberry jam" from the hand + Raspberry from the Basket and so on). Fruit salad and pies are made a similar way, only to make a pie you need to use a completed jam Recipe (by yourself or one you received from trade) instead of taking it from the Basket.

The game is turn-based, and each player's turn has a few phases:

Draw a card – take the top card from the deck.
Trade – players can trade Recipes they made with other players.
Play a card – you can make jam, bake pies, make a fruit salad; you can use one of the special rules; finally you can play a card as an Ingredient and place it in the Basket.
Discard – you must discard Ingredients used to make a Recipe on your previous turn.

The game has a few special cards with special features:

The game ends once all the cards are used, including cards in the players' hands. Points are counted to see who the winner is. Different players complete the tasks on their task sheets differently: Some try to make "Winter jam" or bake "Pies for granny", while others collect "Favorite fruit". At the end of the game it becomes clear who made the correct choices that led to sweet victory!