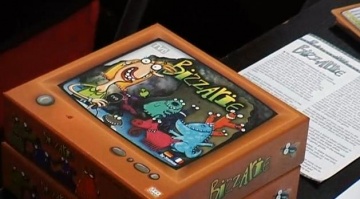 "Bizzaria is a fairy tale world where anything is possible. The core is made of famous figures like the Red Riding Hood, the Wolf or perhaps a Dragon. But these figures appear in slightly different situations than usual. In addition there are many monsters in Bizzaria, which are actually the main focus of the game. How bizarre these monsters will be depends on the players...

The monsters in Bizzaria are created together by players. During the game the monsters are increasingly shaped in their looks and foremost in what they say. The players use parts of cardboard faces and assemble them on a paper. Then they draw the monster around them and these papers represent the "game board". Thus the "game board" is different and unique in each game. The cards in the game are used for the TV announcements and questions. All these clues lead the player to perceive the monsters in a certain way. In each round a special question is asked - in the form of "Which of them is like this and this?". The players then look at the monsters and try to find three of them that (according to their opinion) best answer the question.

After each player secretly writes down his three choices they are all revealed and scored. The game also includes expansions and specialties.

The players have two essential goals. The first is to build up the character of the monsters where in each round the monsters comment on the actual course of events in a Bizzarian TV. The comments are entirely up to the players and they can range from a single interjection (Meow) to highly sophisticated expressions (If he were not a nihilist, I would not be such a therapist). The second goal is to understand the character of the monsters in light of the other players' thoughts." (Quelle: Jira's Games)