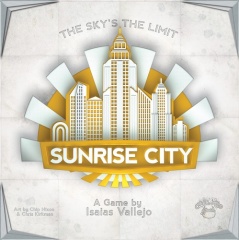 Offizielle Infos:
In the tile-laying game Sunrise City, players build a city with zone tiles, bid for control of those zones, then place building tiles on the city zones to their best advantage. Each round the players use role cards to grant them special abilities in the various game phases. Points earned during play move score tokens up a ten point track. Players score one benchmark token if their score marker overshoots the star at the top of their score track but earn two benchmarks if their token lands on the star by exact count.

Thus, Sunrise City is not a race to score the most points; it's a contest to grow the city in a manner that will earn you the right number of points at the right time to maximize your benchmarks. After three rounds, the player with the most benchmarks wins.