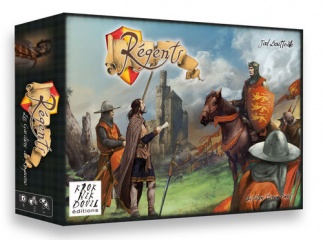 In 1286, Alexander III, King of Scotland, died of a fall from a horse. None of his children who survived him, the Scottish lords declared his little daughter Margaret, then aged 4, Queen of Scots. But because of his age too young, the Lords put up a regency, the Guardians of Scotland for the administration of the kingdom until Margaret was old enough to reign.

Gathered in a meeting in Edinburgh Castle, with the referee King Edward 1st of England, the major Scottish clans will have to use their influence to get the honorary title of Regent, also known as "Guardian of the kingdom."

REGENTS is a placement game / majority where he must win the points of influence in areas key to the kingdom (political, military, religious, financial and trade). The dot gain sensitivity is based on a threshold to cross in order to progress making the game very tight. In addition to playing cards "ACTION" and a charge to make the ambience of the conspiracy.