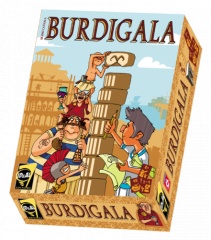 Burdigala is the Roman name for the city of Bordeaux. The game is about the growth of the city during the Roman times.

The board shows a map of the city, with various building sites and streets. At the beginning of the game, a tile is placed on each building site. Each tile shows a building and the reward for completing that building. On the back, it shows the amount of cubes needed to complete the building (2-5). The tiles are placed facedown, so that it is unknown which building is where.

Certain combinations on the dice (rolling seven or rolling doubles) allow the player to take a Corruption token (worth -5 to 0 points) to gain a specific benefit, such as a reroll or a double building action.

When there is no more building to be done, the player with the most points wins the game.