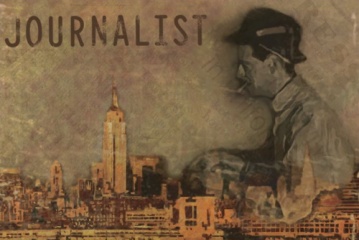 Offizielle Infos:
Morning in an unfamiliar room. Hotel. Headache. Buzzing phone. Roaring chief editor: "Where is the promised article? Where are you messing about?" Tangled language. Your gibbering voice can't stop this onslaught. "I don't care about your excuses! Get up and do something! I want to have a damn good story on the table right away. Otherwise you're fired!" Bashing phone resonates in your head even in the shower. Cold water slightly helps, and after a while you go into town to find something that will satisfy your boss.

In the game Journalist you assume the role of a reporter who writes articles at the last minute, then needs to deliver them to the editor. First, every player prepares a city on his own game plan in which the game takes place. During the game, you are composing words from letters and putting them on your own game plan. You must carefully plan where you put the letters to get more points or some other bonuses. The game is played simultaneously with a sand timer measuring the time. Thus, you are always pressed for time and must quickly work with your imagination and count with maze-like structure of the city which limits your possibilities.

Can you write a quality article and deliver it to the office earlier than others?