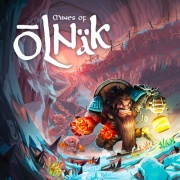 Under the command of the dwarf king, the biggest clans from all over the world meet around the old mountain of Ōlnäk. Their objective is to rediscover and rebuild their lost and ancient city.

Over eight semesters in Mines of Ōlnäk, players have to turn their clan into the most powerful and richest one to claim the right to rule the city. As the chief of your clan, you have to coordinate your workers and choose wisely where to use them, between exploiting the city resources, participating in joint projects, selling resources, and claiming political rights.

Will you be able to become the next King of Ōlnäk?