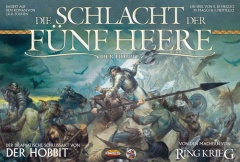 
The War of the Ring line will be expanded in 2014 with a new game: “The Battle of Five Armies” a stand alone, self-contained game, based on the dramatic climax of JRR Tolkien's novel “The Hobbit”, under license from Sophisticated Games.

Created by the same design team (Roberto Di Meglio, Marco Maggi and Francesco Nepitello) of the popular War of the Ring board game, The Battle of Five Armies is based on its game rules – modified to function on a tactical level, as they must describe a smaller battle rather than the entire war.

The Battle of Five Armies will put two players face-to-face, as the hosts of the Elvenking, the Dwarves of Dain Ironfoot and the Men of the Lake led by Bard the Bowman confront a horde of Wolves, Goblins and Bats led by Bolg, son of Azog. Will Gandalf turn the tide for the Free Peoples? Will the Eagles arrive, or Beorn come to the rescue? Or will Bilbo the Hobbit perish in a last stand on Ravenhill? The game will feature a game board representing the Eastern and Southern spurs of the Lonely Mountain and the valley they encircle, and a number of plastic figures representing troops, heroes and monsters.

The new game will not require a War of the Ring copy to be played. Ares Games has plans to expand the “Battles” game system in the future, releasing expansions depicting other battles from the Third Age of Middle-earth narrated in “The Lord of the Rings”, such as the Siege of Gondor and the assault of Saruman against Rohan.

“War of the Ring is renowned as the premier Tolkien board gaming experience. The three authors of this line of games have never failed to delight the board gaming world with their inventiveness. Ares Games is well known for the quality of their productions, as seen in the second edition of the base game and in the expansion Lords of Middle-earth. This team provides an experience which is totally true to the spirit of the books themselves, and I am sure that The Battle of Five Armies will not disappoint in any of these respects”, declared Robert Hyde, Managing Director of Sophisticated Games.

“We are glad to announce this new game and we are very proud that Sophisticated Games entrusted Ares with this project. The War of the Ring line has a large and dedicated player community, and we are sure that The Battle of Five Armies will be highly appreciated by anybody who is familiar with War of the Ring. But we’re also confident that the new system and its innovative features will be very enjoyable to anybody who is a fan of the works of J.R.R. Tolkien, and especially of The Hobbit”, said Christoph Cianci, CEO of Ares Games.

The Battle of Five Armies game will be released in 2014 and includes 125 plastic figures.