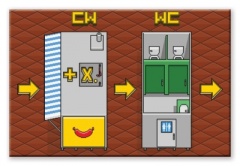 
ESSEN: CW & WC is one of the ESSEN bonus tiles

When playing with the bonus tiles, players have one additional action during the Action phase. By placing their player token next to the bonus tiles, a player is allowed to either place a bonus disc on to a tile, or move one disc from one tile to another. If a disc is moved away away from a track, all progress made on that track is lost.

The bonus tiles are all intended for games with at least 3 players.

ESSEN: CW & WC
While many forget to eat anything at all, booth staff at ESSEN must occasionally have something to eat. When that happens, options are limited, but a Currywurst stand is never far. Motivated by the semblance of nourishment, morale rises, and the whole booth benefits. However, this is not without sometimes sudden and inevitable consequences...

When moving into the CW, and while a player’s disc is there, a player can always move ahead one step in turn order during the Cleanup phase - ie. if 3rd, they become 2nd. Their disc must remain in the CW and continues to give this benefit in each subsequent Cleanup phase.

A disc in CW may only be displaced when another player places a disc there. The displaced disc is placed in “WC”, where it must remain until it can be moved again.

A disc in WC does not give any benefit. It may be moved again in one of two ways:
When yet another player places a disc in CW, causing the disc there to be moved to WC, which frees the disc currently in WC.
OR
If there is still a disc in WC at the Cleanup phase of an afternoon round (2nd, 4th, 6th, 8th), it becomes available for use again in the next turn.