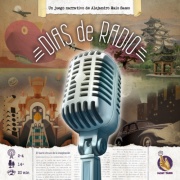 Días de Radio is a storytelling cooperative card game in real time for 2 to 4 players. The players choose one subgenre from a series of twelve, then tell a story using phrases in the cards. The storyteller sets aside their hand during their narration, using only cards given by the other players until time runs out. The storyteller position then rotates in clockwise order, and the next player begins their turn, continuing the story.

Each turn brings the game closer to conclusion. When the endgame is triggered, the current storyteller must close the tale. Players have the option of using the "Press Review System", which consists of four different tableaus featuring unique words: Creative, Bizarre, Engaging, Poetic. As each narrator finishes their turn, the rest of the players draw a cube from a common pool and place it on one of the four tableaus. Thus, at game's end, the tableau that has the most cubes determines the press reaction to the show (the story). On the back of each of them, there are fictional newspaper articles praising the players.

The game is in Spanish, full languague dependence, and it has an icon system for the color blind.