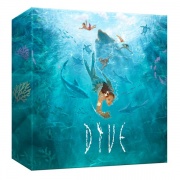 Dive into the water.
Progress deeper and deeper avoiding disturbing the sharks to be the first one to grab a beautiful gem thrown at the bottom of the sea. Pay attention to your oxygen, you need to use it carefully and at the right time to keep the strength to reach the treasure. Keep your eyes open, some kind animals might help you to dive deeper.

Dive is a game using the transparency of cards to play a unique experience. Your sense of observation will be at the heart of the game but the strategy may make the difference.

Stack 36 thick transparent big cards in the middle of the table. Each player receive 8 Oxygen tokens, 3 Oxygen reserve tokens and 1 personal board. Place aside the items tokens (values: 1, 2 and 3).

Dive is a competitive game. The players all look together, from above, at the stack of transparent big cards, trying to discern, by transparency, dangers and items to collect.

By hiding their programming, each player arrange the Oxygen tokens in a column, one per depth level, from top to bottom (maximum depth is 5). Any Oxygen token placed on its red face signals that the player has detected a danger at this depth.

If a player detects an item to be collected at a certain depth, she can stack several Oxygen tokens for this depth in order to obtain a majority and to be the only one able to collect this item.

a] All players simultaneously reveal their programming and the resolution can begin.

b] The transparent card at the top of the stack is put aside so that you can clearly see what is on it.

d] Players who are still in play for this turn may collect any item at this level, unless another player has invested more oxygen at this level.

e] As long as at least one player has programmed an additional level of depth, the operation is repeated (from b] here above).

f] Finally, the player(s) having reached the deepest depth receive a reward.

In the event of a programming error, any item collected is lost. To avoid this, there are two possibilities…

a) Use an Oxygen reserve token to recover full oxygen potential, and the items are secured.

b) Skip your turn.

6. End of game and victory

The game ends when a player spent all her oxygen, or when all 36 transparent cards have been discarded. Then the player having the more victory points (through the collected items) win the game.