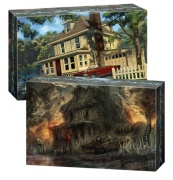 Upsideville is a peaceful town somewhere in Indiana during the early 1980s. Lately, more and more people have started to notice some strange things happening around their hometown. All across town, a weird-looking figure keeps appearing out of nowhere. Disturbing images of breaches in reality show a darker and more horrifying version of our world. We need to inform everyone else that something strange is going on, before that thing from the other side takes control of the town.

InBetween is an intense confrontation between two players in which one player takes the role of worried citizens who are trying to stop a disaster from happening. The other player plays as the dark creature from the other side that wants to devour everyone and everything. It's a head-to-head challenge that takes place all over the town.

Players play their cards to interact with people around the town, dragging them between two realities to either protect and save them, or scare and devour them. The gameplay is very rich and intense, and you must stay focused as there are three ways to end the game and either lose or win.

This game places you between two realities so different from each other and yet the same. The fate of Upsideville is in the hands of the players. Will the citizens be able to win and walk peacefully once again around the town? Or will the darkness triumph, and the horrifying creature will walk freely between the alleys?