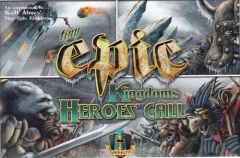 The war continues and spreads further and further. New factions have arrived from the north igniting more epic battles than before. Heroes rise over the fallen bodies of their enemies. Kingdoms spread across the frozen wastelands in search of silver. War Towers grow taller than the trees. Who will be victorious in the end?

Tiny Epic Kingdoms: Heroes' Call introduces heroes to the war. Heroes will bring to play a variety of benefits unique to their class. Players will use a larger meeple to represent the hero of their faction.

Additionally new mechanisms are introduced to the building action of the game. This will have players tracking their tower progress by placing tower cubes onto regions they possess. Players are encouraged to keep these tower cubes safe because losing them in war results in a loss of progress on the tower card.