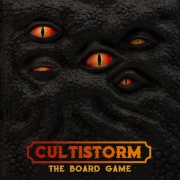 Cultistorm is a Cooperative Weird Fiction and Cosmic Horror Board Game in the universe of H. P. Lovecraft.

Cultistorm is the expression of our respect and love for H. P. Lovecraft. It is more than just an ordinary board game – this is a Lovecraftian gaming experience with literary and musical dimensions. Our theme choice was motivated by a deep commitment to the work and heritage of H. P. Lovecraft. We want to create an excellent board game for those who know and love Lovecraft, and we would like to make Lovecraft’s work known to those who are board game fans.

- A highly interactive gaming experience offering unique cooperative game mechanics where every player is of equal importance.
- Scalable difficulty: the game’s setup options allow players to adjust the difficulty of the challenges they will face (this feature is included in the base game).
- Narrative Expansion and Script Book: the true jewel of Cultistorm is a hardcover book containing 500+ pieces of high quality weird fiction, illustrated with colourful full-page artwork. The Narrative Expansion is a story-driven game mode in which the stories impact the game itself.
- Solo Expansion for those solitary detectives who wish take up the fight on their own.
- Campaign Expansion: seven connected and increasingly challenging scenarios introducing new game mechanics.
- Overlord Expansion: this adds a sixth player who takes on the role of Lovecraft himself. As a puppet master, this player controls the cultists, and thus the whole game.
- Nine minor expansion modules: each of these introduces new game mechanics, increasing the replayability and difficulty of Cultistorm. Most modules can be played simultaneously.
- Game Night Expansion (as add-on): this unique and innovative expansion provides the possibility of combining up to six separate Cultistorm games into one epic story. A common fight, in which the choices of the different teams can impact each other. This expansion was developed specifically for clubs who organise board gaming events.
- Hardcover Short Story Collection: the stories were specifically written for the game by a group of fifteen experienced authors with a vast knowledge of weird fiction writing.
- Cultistorm Soundtrack by Graham Plowman: crafted especially for Cultistorm by one of the most renowned composers of the genre, this album gives you something to listen to as you uncover the twisted secrets of Arkham.
- Investigator Badge: this is a special Early Bird gift for our backers. Those backing the game with a “Collector Pledge” or those who support us in the first 72 hours will receive the badge as a free gift. Later it can be purchased separately as an Add-on.