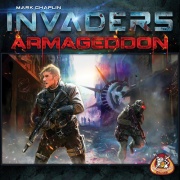 “HELP!”
The scream travelled as far as the distant roar of circling jets would allow.

Shazia Barnes had come to the far end of a ruined mall’s parking lot, searching for her husband when she heard the cry. She spun around, watchful for alien locusts, and the dreaded flying ‘squids’. Shazia heard the woman’s cry again as she swept the mall, carbine at the ready. The weapon was the only companion who’d made it this far, and she’d scored ‘him’ once with her knife for each deathworm she’d put an explosive-tipped caseless round into.

A megalithic starship was visible on the horizon, hanging like cast-iron doom over the distant mountains. Towering columns of black smoke roiled upward from the city in front of her. Shazia studied the landscape, stone-faced. It was clear to her now that her husband must be dead.
Picking through ravaged corpses, and steering clear of a downed chopper, Shazia walked toward the cries, as a squadron of ‘Barracuda’ jets roared overhead. As they sprinted for the spaceship, Shazia thought they looked like a school of minnows attacking a great white shark.
She fingered her wedding ring and moved on.

CAN MANKIND OVERCOME THE ALIEN THREAT?

Invaders: Armageddon is an expansion for Invaders, comprising three expansions in one package.

Armageddon expands the number of possible stratagems available to each player, from the board-set ones available in the base game of Invaders. Due to the hidden nature of these powerful additions, both players are kept guessing as to their opponent’s overall plan of attack – until it might be too late!

Mankind has also gained a new phase, allowing him to attack the vast alien mothership, and possibly increase his shot at victory against the alien overlords. This addition alters the way both players fight the invasion of Earth:
Will the Invader move scarce resources to protect the mothership - which has an energy source available to help play Invader cards, or can fire a mega-death super-weapon.
How many cards will Mankind play to directly attack the mothership, because every robot or tank moved to strike the starship is one less card available to defend Earth from other attacks...

This expansion also adds three new theatres of conflict (coastal cities) for both sides to combat over. Along with his hand of cards, the Invader player deploys alien squids to form an ever-increasing swarm, while Mankind struggles to defend Earth with a limited number of jet squadrons.