Siege of the Citadel 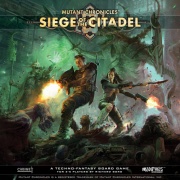 Siege of the Citadel is a reboot of Mutant Chronicles: Siege of the Citadel (1993) and set in the Mutant Chronicles universe with each player controlling one of five corporations: Imperial, Cybertronic, Mishima, Capitol, or Bauhaus. Each player begins with two of their own unique Doomtroopers who both benefit from their Corporation's special ability. The players must prevent the Dark Legion and one of its vile leaders from conquering the solar system. Each successful mission brings news of monstrous foes and terrifying events as the heroes explore the modular Citadel. Promotion gives credits to access more powerful weaponry and abilities, while secret missions can cause chaos for the heroes!

The narrative-led design of Siege of the Citadel builds on the gameplay mechanisms of the original release, and new campaigns based on major events from the Mutant Chronicles universe will expand on the much loved game.