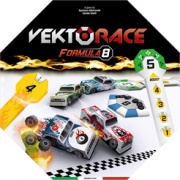 VektoRace is a racing car simulation based on a vector movement concept called "Octagon System". The game requires only a flat surface to be played so you won't find a game board inside

The official maximum number of players is four, but the game can be easily played up to eight players.