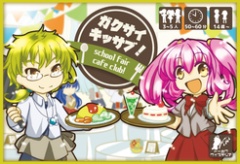 Senior members have quit the after-school club because of their upcoming graduation, so you are left in the club alone. You must get more members to get over the crisis of abolition of your club, and there's one big chance: The School Festival! To publicize your club, you have decided to open a cafe in the festival. You gather members to help your cafe and your club, while earning money for your club by serving drinks and snacks. If you build a high reputation throughout the festival, your club will be allowed to continue!

ガクサイキッサブ! (Gakusai Kissabu!), a.k.a. School Fair Cafe Club!, is a worker-placement board game with a theme of business simulation, and the player with the highest reputation wins the game.

During the four-day festival, you manage your cafe to earn money and build reputation. A day is split into two phases: activity phase and trade phase. During the activity phase, your members invite another member to help you gain products and raise your publicity. You need products to sell for money, but you also need publicity which is counted as number of trades allowed in the trade phase.

During the trade phase, you sell your products for money and buy equipment for effects or reputation. A player with highest publicity makes a trade first, and may even make multiple trades in a row if that player's publicity is far ahead of anyone else. There is limited demand for products, so players with low publicity might miss chances to sell.

All ten members have their own special abilities which improve their activities and trades. However, members sometimes belong to two players at a time, in which case only one player may use that member. Player order is important in various ways.