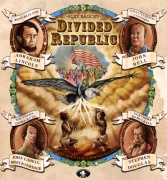 The presidential election of 1860 was one of the most critical in the history of the United States. With civil war looming as a near inevitability, the challenge was to find a way forward after years of degenerating political discourse in the increasingly divided American electorate. In the end, after months of contentious campaigning between four (!) major parties and over a dozen smaller ones, the election was won by the Republican dark horse candidate, a little known Illinois politician named Abraham Lincoln who hadn't even been the first choice of his party's senior leadership.

Divided Republic is a card driven two to four player game representing the last calm before the storm that was to become the American Civil War. Players represent the four major parties (Constitutional Unionists, Northern Democrats, Republicans, and Southern Democrats) and attempt to win the presidency by defeating their opponents with dirty tricks, platform speeches, and the manipulation of key historical events. All the while, President Buchanan interferes, radicals riot, and the country continues the downward spiral toward civil war. If one party wins the election by achieving the necessary 152+ electoral votes, or wins in the case of an electoral tie thrown to the US Congress, history may well change. Nevertheless, there is always the chance that the population of South Carolina will finally explode into open rebellion and secede, ending the game, at which point everyone loses!

This is a light to medium weight game with intense player interaction, card-driven play, and a play time of about 2-3 hours depending upon how events proceed. There are even a few laughs along the way as the mudslinging between parties heats up. Literally anyone can win - it's not simply a cut and dry Republican victory. This is a different kind of US election game, a game where there are not two, but four parties, set in a period when candidates did not generally campaign for themselves, and run in an era when the Republicans were still liberals and the Democrats were the vanguard of traditional American conservatism.