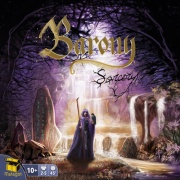 Barony: Sorcery, the first expansion to Barony, brings magic to the world, with a sixth action now available to the players that allows them to cast powerful spells. Before they can cast spells, however, they need mana, and only a few places on the board allow them to collect those precious mana points. The battle for control and access to these places will be hard!

Barony: Sorcery stays true to the base game as the new elements add no luck to the game, instead opening up possibilities for players to bend the rules, thereby adding even more tension to the board. This expansion also adds components for a fifth player: new tiles, new wooden components, new player aid.