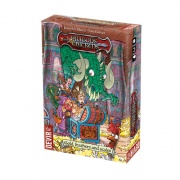 “A game of visual acuity and quick reflexes where you will have to collect treasures, hide from a terrible dragon, catch chickens ... and steal from your teammates, of course.”

In this game players will be revealing cards from each of their decks at the same time. These cards include icons representing different treasure items. Whomever first notices which icon is repeated more times in the cards needs to say it out loud; if it is correct, that player collects all of the cards played by the players. If more than one icon is present multiple times, then the player who grabs the chest first gets the cards.

There are also dragons hidden in the graphics of the cards. When one of those cards is revealed, everybody needs to put their hand on top of the shield. The last one to do so will have to pay all of the cards he has collected so far that include the symbols indicated in the dragon’s card. However that player can produce avoid this by producing a Chicken card, as dragons love chicken and are happy to forfeit all treasure as long as they can get a tasty meal. .

At the end of the game, whomever has the most treasure cards in his stash wins the game.