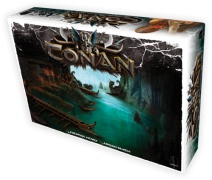 Far to the South of Conan's home there lies a dry, arid land where a rugged, dark skinned people eke as much of a life as they can out of the sands. The environment is not the only danger in these lands however, there is a darker, more sinister power at work, one that man should have known to leave well enough alone but the promise of power is too tempting for some. Now the dead rest uneasily beneath the sands and monstrous beasts devour men like cattle as the great and powerful watch on, eternally.

Presenting Conan: The Boardgame's Second expansion, written by Bruno Cathala, the author of Five Tribes, Cyclades and Abyss. Delve deep into the sands of Stygia, through undead crypts and hordes of undead abominations to discover the real evil that lurks beneath this sunburnt land.