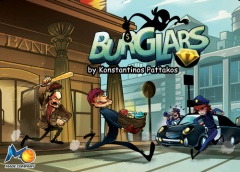 The burglars arrived at the same day at the same bank to steal the diamonds. Everyone is trying to stop everyone else from stealing the diamonds that they want for themselves, so naturally they're also trying to rob one another. They're here to get rich, not make friends...

Your goal in the party card game Burglars is to have the most diamonds at game's end, which occurs when all diamonds have been stolen from the bank. To create that bank at the start of play, place the 25 diamonds in the middle of the table. Players shuffle the cards, then each receives four cards.

At the start of a turn, the active player declares whether they'll rob the bank or another player, then they roll the die to determine how many diamonds they'll steal. This die roll can be modified by the cards everyone plays — whether positive (green) cards or negative (yellow) cards — after which the player receives from (or gives to) the bank or an opponent the appropriate number of diamonds. The player takes three more cards from the deck, then ends their turn.

It's time to use your skills!