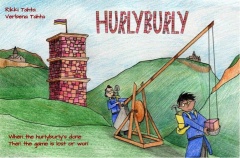 In Armenia in 1901, you lead a team of scientists on an international expedition. In the remote mountains you discover a new element in the volcanic rock and realize that the first team to report the discovery will gain the credit (and everlasting fame). The fastest way to communicate is by flags, so a race starts to build towers and keep your flag flying long and high enough to stake your claim. Of course the other teams have the same idea...

Hurlyburly is a physical dexterity game of building and defending your tower while trying to demolish your opponents' towers and steal their resources. Imagine Super Rhino (Rhino Hero) with catapults!

On your turn, you can take one action:

The winner of the game is the player who has a five-level tower with their flag on top at the start of their turn. While there are some nice gaming choices and different paths to victory, it's not a very deep intellectual game — BUT it's barrels of fun!