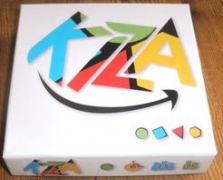 Kiza is a bidding card game.

The game consists of 112 cards showing 4 different colors, 3 different geometrical forms and 7 different numbers and 6 cards used as a place for the won cards. Each player starts with a hand of 18 cards and plays one or more cards face up in front of him. These will be offered. The starting player chooses one of their cards in front of them and bids for it with cards each showing at least an identical geometrical form or color. The sum of the numbers is their bid. All players may bid in turn higher or pass in several rounds, until all but the highest bidder pass. The latter wins the card. Whoever has 50 points or more after several games wins.