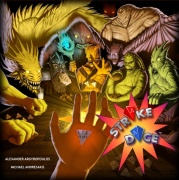 
A game of luck and strategy which comes to us through the centuries. An ancient tale, a game based on D4 dice and few attributes on the tricards offer a strange and entertaining feeling but most of all the multiple game results create an almost impossible possibility. For the first time the dice which are a tool of luck take a strategic role and travel you through multiple levels.

In the game each player owns 8 Triangle Dice (Pawndice) and must place each one on the board's Tribases. The Tribases are total 8. The 4 of them are the main ones and the rest 4 are the additional. The board looks like an octagonal star and each side is called Tribase. The dice here have 2 roles, the dice role which defines the moves you can carry out on the board and the pawn role which defines the dice power. On each Tribase there is an attribute which can be activated through the cards you will find in the game and after you have placed a Pawndice on them. These attributes will help you or bring your opponents in a difficult position (or the opposite!). The Tricards which carry out the effects of each attribute can be activated once per Triangulation, so watch your step!

The key in this game is to cast the highest numbers with your Pawndice in order to secure a certain position on the board. Each tribase on the board has the exact opposite on the other side. So, when you have placed a Pawndice with number 3 on a Tribase, then on the opposite one, your rival must place one of his Pawndice with the same number or higher. In the second case your Pawndice is been removed from the board and you can use it in a next round. Be careful though, there will be many times where your Pawndice will be not fit on the board. In such a case your Pawndice are excluded totally from the Triangulation. Winner of a triangulation is the player who has the most pawndice on the board while the game winner is the one who will collect 5 of the Tricards or at least the half of them. If 2 players have the same ammount of Tricards, then play a last Triangulation to determine the winner.

A simple game which will surprise you many times by its combinations. You will also entertain yourselves by playing the variants and the different game modes depending on the game's participants. In a 3-Player Triangulation all the rules count beside 2 basic one, so the results will be totally different. In the ally mode (4 players), you play in teams of 2 and your Pawndice act as single unit. You combine thme to defeat your rivals. In this game you can win even you bring small numbers, even if you have less Pawndice on the board. How? You have to find out!