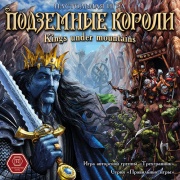 
Players command four fantasy races in Kings Under Mountains — orcs, dwarves, goblins and giants — and they use these creatures to secure mines up for grabs, then develop those mines. Why would they do this for you? Because you're the king of one of these races, that's why!

Each card in the 80-card deck is double-sided; one side depicts a creature from one of the four races and a numerical value (0-9), while the other side depicts a mine with a defense value, a size value, and a point value. To start the game, shuffle the deck, lay out four mines, deal each player a hand of six cards, then lay out four cards creature-side-up to form the Camp; group like creatures on top of one another. Each player also receives a King card to show which race he represents.

On a player's turn, he must play a creature on (1) a mine currently up for grabs or (2) a mine that he's previously claimed. In both cases, the creature being played must have a higher number than the creature currently on top of the stack — except for a 0, which can be played on a 9. In the former case, you can play a card of any race, while in the latter case you can't play a card of your own race! When the number of cards on an available mine matches that mine's defense value, the King of the race on the card last played claims the mine. (If that race isn't in the game, whoever played the card claims the mine.) Move all of the cards played into the Camp.

When the number of cards on a claimed mine matches that mine's size, discard all of the creature cards to the Camp, then place the mine under your King — unless the mine bears an overseer symbol, in which case you need to first play a creature of your own race on top of the creatures developing the mine (following the rule for how to play cards) before you can score the mine and place it under your King.

To end your turn, you refill your hand to six cards by drawing the top card from the deck or from one of the four race piles in the Camp. When the deck runs out, the game ends. Players score points for all of the mine cards that they've fully developed (that is, mine cards under their King), then lose points for mines claimed but not yet developed. The player with the highest score wins!