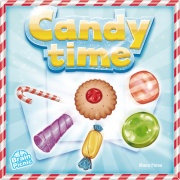 Candy Time is a tile-placing game in which players have to complete pieces of candy. None of the tiles include a whole piece of candy; they have only halves — four halves actually, one on each side of the square tiles, so we have to combine our tiles with the ones on the table to complete one, two, or even three candies. Some candies are worth one point, others two points, and some of them let us play an additional tile.

The game starts with a wall of candy tiles on the table, all of them placed randomly. Players receive three tiles, and they play one per turn, placing it on the table and taking as many tiles as pieces of candy that have been completed. The tiles don't have to match every single side, so if we place a tile touching three others but only matching two of the sides, we take those two tiles and leave the rest. We keep aside the tiles that we get from the table as they are our points. The tile that we played stays on the table, and we receive a new one at the end of our turn so that we always have three from which to choose. Whoever gets the most candies wins!