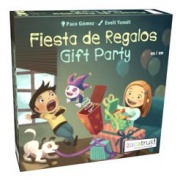 Everyone is here, and our party is ready to begin! The best part is that our table is filled up with all kinds of presents, but everyone wants the best ones for themselves!

Gift Party is a very easy game to learn and it contains a lot of fun for everyone in the family. It is a game about collecting presents and it is built upon easygoing mechanisms.

The aim of the game is to collect as many gift as possible, but watch out, because not all the gifts the players could collect are worth of keeping them, since everyone has a Gift List and they need to stick to it. Since then, the first action for every player will be to withdraw a card from the deck. This card should have five different gifts represented and, as you already deduced, it is our Gift List.

To acquire different presents from the table, every player should roll the die. When the present is collected, the players could perform different actions with their gifts (open & keep them, exchange them with other players or even steal gifts from another player's reserve). Some gifts will also let you perform extra actions during your turn.

Every player should make an effort to collect the gifts represented in their Gift List, since only the gifts that appeared in this card will push them closer to the victory. They will try to hide which ones are part of their list and, at the same time, they need to ditch all the gifts that there are worthless, according to their list.

Once there are no more presents on the table, every player will count how many of their gifts match the ones represented in their Gift List. The player who came closest to fulfill their Gift List will be appointed the winner.