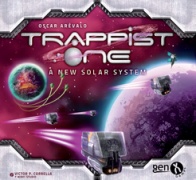 During the 22nd century, the solar system of Trappist One has become the second home of human civilization.

In Trappist One, players take on the role of leaders of Earth's mega-corporations, which are hybrids of old mega-companies and states. Your goal in the game is to dominate the different planets of Trappist One by populating them, but it wont be easy! You will need the help of the Biocultists, a religious-scientific group of cultist that excel in the techniques of bioadaptation and eugenics. Will you be the one in control of humanity's fate?

In Trappist One, players compete for who has the most victory points before one of the decks runs out of cards. To do so, you have to manage a good flow of coins, resources and cards on your planetary system. Each player has a personal player board with different planets on it. You have to play factory cards on them from your hand to produce coins. Once a planet has reached its full capacity, you also activate its special ability and upgrade your hand size.

You use coins to buy new cards from a central market line-up, which displays factories, orbital stations, carrier ships and workers, which score the most VP. You use carrier ships to draw new cards depending on the amount of factories of the same resource you built on your board, and orbital stations grant you new permanent powers without taking up any space on your board.

Colonize your planets and get a good combination of structures to get more resources during the harvesting phase and, in the end, dominate Trappist One!