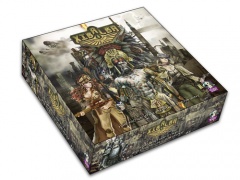 Imagine a world in which our technologic enhancements yield the powerful diesel-driven machines of the early 20th century. A world in which the discovery of an alien resource has changed the industrial evolution forever. Where the military arsenals have never been used to incite a world war, but for the very survival of mankind. It is the year 1948 and the world as we know it has ceased to exist. Welcome to Xibalba, where the remains of civilization fight for their very survival in an inter-apocalyptic dieselpunk world.

In Xibalba, players gather resources, expand their bases with soldier, civilian, and structure cards, weaken their opponents by attacking and raiding them, and enter the contended ark to loot Paragon in order to win the game.

Xibalba is designed for two to four players. A second copy of Xibalba allows games of up to eight players!

Xibalba is played in a turnaround sequence with players rolling dice to determine their resources and attacks and then taking their actions by purchasing cards, performing attacks and loot for Paragon. The first player who reaches a certain amount of Paragon (defined upfront) wins the game.

Thus the victory conditions are adjustable, the game duration can vary by a lot.