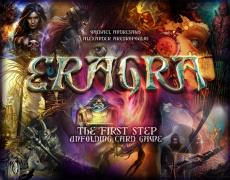 
Eragra is a new Unfolding Card Game based on a totally different mythology, a new fantasy world, which speaks about this game of oblivion, born in the ancient and unknown times, during the Kingdoms and Antikingdoms Division Age. It traveled through time, destroying empires and nations, came to us and passed to the future, but the legend speaks for 3 figures from different ages, who united stood up against it and fought hard the evil, Great Dark Archon..

The game is moving through 2 different dimensions, the one belongs to the past and the other belongs to future, after our days, there where our planet has become a vast desert full of machines and cyber environments. In the past, the Summoners (nickname for players) own several Stacks (decks) to handle. The basic one is the Duel Stack which consists mostly of Figures which belong to the Eragra Mythology, as well as several new card types such as Ploys Ad Hoc, Relics, Walls, Incantations, White Cards and many other. The next 2 basic Stacks are the Mastery and the Grim one where the Summoners must Unfold and release their fearsome power during the duel. Each Stack consists of several card Leagues such as Carnage Phantoms, Vortexes, Master Gnomes, Paladins and much more. All these cards are in the possession of each Summoner. But there are more Stacks which form a Common Space and can be used by all.

The Parchments Stack: Unfolds the different Groups of Minions and allows you to invoke them on your Duel Field, enough to find the right ones and the most basic, these cards can be activated just once. (Minions are called all figures with life, anything alive)
Tokens: are used by all through the variations of the cards' effects.
Incantations Stack: Is sorted in White and Black Magic: Each Summoner can draw 1 card per turn from each Stack, decides which one he wants to play, performs the acts which are given through the equivalent card and then he can activate it. You see, to activate for example a Black Incantation, you may need to perform 3 Evil Acts.. such as to destroy a rival's Minion. For each act you collect, depending on the case, a White or a Black Cube (game component).
Craft Pool: A common space for all, in order to place all the used Incantations, Walls, anything without life!!
Pyra: A common space to place the destroyed Parchments.
Limbo: A common space which acts as a banishment ground for all of your Minions and there they stay.
The purpose in this world is to send as many Minions as you can to Limbo in order to collect Crystals-Gems (game component). The max number you can collect is 25 Crystals.

The next step is to enter the Future World which can be done easily by activating only 1 specific card from your Duel Stack. You can enter there any time you want but will you have enough Crystals? If you enter the Future World, then the rest Summoners must follow you with the Crystals they have collected from the first phase. In this world everything changes, so do the rules, but they are much simplier. The Future Stack consists of 120 cards and is sorted in 4 parts. The cards you find here are Viruses, Machines, Weapons, Ambushes, Future Survivors and much more. Here the Summoners use their collected Crystals. Each Future card has the sing of a Crystal along with a number. For example a Summoner may have a tank and on it the Crystal sing and the number 3. Since he activates this card, places the equivalent Crystals on it. That means, the rivals have to beat this card thrice. With this way, the tank will be destroyed. Each time the rival wins a small battle, the Summoner removes a Crystal and gives it to him. So, the final purpose is to remove by any means the Crystals from the rival/s or to destroy the Future Survivor of his/them (there are 4 Future Survivors: A Hacker, a Cybermage, a Rebel and a member of the Torrius Syndicate who are protected by your Machines). In this game you will find more and more things to discover while you play. It may look a bit complicated but its' too simple. The point is to combine your cards well.

You will enjoy it more, if you play with more than 1 rival. You can make alliances with a rival Summoner to defeat another but at the same time you must defeat your ally too. Your only true ally is your Minions. Are you ready?

PLAY OR GET PLAYED!

After 10 years of creation we really hope you enjoy the first part of the ERAGRA world, as we do.