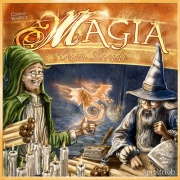 The apprentices of the Academy of Babas came together to fulfill their master exam. For this purpose, each of them has received a test spell, which consists of a certain composition of six energy stones. Now they have to collect the stones, which are spread on the floor tiles of the tower. But this is not as easy as you thought, as well as the other apprentices and one or the other of the masters want to have this energy, too.

The game ends either a magician succeeded in making his two students pass their test or the time has expired. This happens when the deck of movement cards is empty. The magician who generated the most victory points wins.