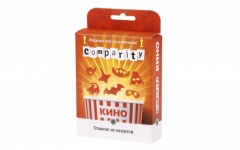 On your turn, you can place a card in the grid or check if a previous player placed their card correctly. If you check and the placement is correct, you must draw a card, but if it was placed incorrectly then the person who played it must draw.

The player who manages to get rid of all their cards first is the winner.

Magellan also publishes another version of the game, Comparity: USSR, with the same gameplay but different cards.