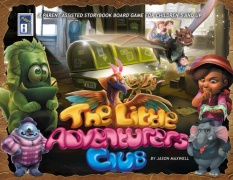 
Little Adventurers' Club is a parent assisted, cooperative, children's game that includes a book of over 100 illustrated encounters designed and written by Jason Maxwell (Agents of SMERSH) with additional story contributions by Scott Almes (Tiny Epic Kingdoms). Players (or parents) read aloud 4-5 encounters as the Little Adventurers race against a Wizard that is trying to prevent them from reaching their destination, a dragon's cave in the mountains. The Dragon is the only creature that can get the Little Adventurers back home. Older players may elect to read the encounters themselves; the game is suitable for a variety of ages.

Little Adventurers' Club can accommodate any number of players.

Players are members of the Little Adventurers' Club that meet every Saturday because their boring parents get together to play cards. The children find themselves transported into a book found in an old trunk in the attic to a fantastic world of funny and odd creatures. However, there is a Wizard that wants to keep the children from returning home. The players race against the Wizard to be the first to reach the Dragon that lives in the mountains.

There are plenty of illustrations and sketches by Kenneth Garcia. Little Adventurers' Club will include a small fold out board, two large custom dice, over 35 unique and funny cards rewarded by encounters with titles such as 'Love Poem to a Cow', 'Skeletal Remains of a Jelly Filled Donut', 'Seeing Eye Cricket', 'Find Your Inner Pie', 'I Once Had a Snap Then Suddenly...No Snap!', ' It May Be Silly But Magical Bunnies Are Real' and more. Also included is a children's book of illustrated encounters. Gameplay includes dice rolling coupled with strategic decision-making based upon six cards that are placed next to the board. Players choose how best to apply their dice results, which will advance both the players' token as well as the Wizard.

There is an entire world of creatures to discover in the book, so the game can be replayed many times before repeating encounters. Creatures encountered include the Green Eyed Googly, Bluebeak the Patchwork Bird, Sir Frapple the Cyclops, Shamboozle the Witch, Phillip Turtle, Mother Dragon, Deepfat Bokra with Nugget Crusher, and many others.