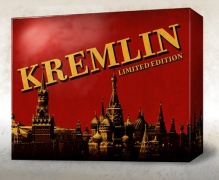 Originally released by Fata Morgana in the 1980s, KREMLIN is a European-style boardgame where players compete to control the Communist Party of the Soviet Union.

The Jolly Roger KREMLIN features updated art and better components created in the style of 1930s Soviet poster propaganda. This edition has an error on the board that has the name of the game covering part of the graphics and text on the board.

Kremlin is played for up to ten turns, ending as soon as the Party Chief successfully waves three times at the May Day Parade or when so many politicians are dead or in Siberia that the Party Chief can disband the Politburo and take complete power for himself.

Each turn has phases. The most important of these are the KGB trials (which can send party members to Siberia or the cemetery) and the Defense Ministry's Spy Investigations which can also force politicians on a winter's gulag holiday. With the KGB, the catch is that the higher up the ladder the target, the more difficult to bring down, and Party Chief's tend to change KGB leaders who take shots at the top... For the Defense Minister, his investigations require a trial to be successful--and a guilty vote, and that isn't always possible in the Central Committee.

The catch? Players allot influence secretly at the start of the game and don't reveal it until it is used, meaning no one knows who controls the KGB or any other ministry, not until Influence is revealed--and even then, who knows who still has undeclared influence on that person? It is possible that players can swap control back and forth over the KGB chief even as he is trying to determine who to assassinate!

Once the carnage is done, players have to survive the ravages of aging--and every time a politician takes action, he ages faster than normal...your 50 yr old star of the party? Well, suddenly he's acting like he's 83, Comrade. Life near the top will do that to you. In the Health phase, politicians may die or grow sick--sick politicians can choose to go to the hospital, but while there, they exert no influence and their responsibilities pass on to other politicians. Sometimes this means your man must make the heroic sacrifice to the Rodina and remain on the job even while at death's door.

Once we know who is still alive, the Party Chief is allowed to move politicians between posts. After all, he's in control of the bureaucracy. He can move people up and down, and when he's done, upper ministers do so as well--but can only affect politicians below them on the food chain. Heck, politicians can even sponsor comrades in exile in Siberia to come back to the People. Of course, each person you bring back ages you five years....want to bring back five? Age 25 years in the blink of an eye, Tovarich.

Intrigue cards allow you to take control of situations or foil other players' schemes. In one of the older versions, you could have things like Chernobyl take place in 1920. That's been corrected--so that while events may be the same, they have now been made era-appropriate.

The turn ends with the May Day Parade. If the party chief is healthy, he can wave throughout the day making people happy--clearly our socialist union is prospering. But if he's sick, sometimes he leaves early and is unable to wave, sending doubts through the ranks. If a faction (player) earns three waves, they win the game.