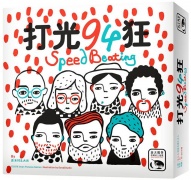 One day, Kuraki Mura returned home as usual, but fainted instantly after struck by a beam of light. Since then, he has paid much attention to the features of people, such as the length of hair, glasses, earrings, moles, and beards, and he's had reflex actions of beating someone on the head or dodging someone's attack.

In each round Speed Beating, one card is flipped over, and there are two features on each card. If you have the red feature, grab the hammer as soon as possible to attack! If you have the blue one, grab the pan to defend yourself! If the player with the red feature beats the players with the blue one on the head successfully, they receive 1 point. The first player who collects five points wins.