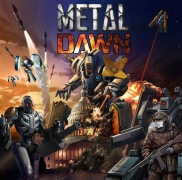 In Metal Dawn, a networked rogue satellite military defense system named Dominus has revolted against its makers, turning its machines of war towards eradicating mankind in a cybernetic revolution. The players are a united faction of agents whose mission is to destroy the forces of the machine while hacking the network to take down the satellite before it’s too late.

In this fast-paced, action-packed, highly replayable cooperative game, 1-4 players make meaningful strategic choices that determine the fate of the world. Players work together to equip their agents, activate zone abilities, and combat the forces of Dominus while collecting intel to crack the code for deactivating the rogue satellite putting a stop to his plan. Once hacked, Dominus is forced to land on Earth and transform into a giant battle robot to face humanity the final showdown. This must all be done before Dominus overruns the world sending it into a chaotic terror and disarray thereby allowing his forces to subjugate and eradicate mankind.