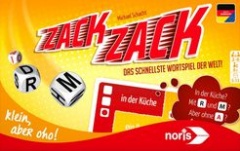 In Zack Zack, Players compete to be the first to form a series of words conforming to specific subject cards using only the letters rolled that round on the three letter dice.

Every round, players reveal a new subject card, and then roll three letter dice and a single number die. The players then must be the first to form a amount of words denoted by the number die, containing letters shown on the letter dice. Whomever is first wins the round, and receives a subject card as a point.

After a player hits a pre-determined goal of subject cards, then that player wins!