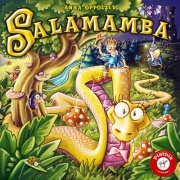 Salamamba is a cooperative game that be played across three worlds as a campaign or individually on each world. The game board resembles a fairy tale book, with four individual elements on it.

In the game, players cling to the side of the friendly yellow snake Salamamba as it attempts to outsmart the poisonous magician Fiesolix. Both characters move each turn through the use of dice. The sorcerer's purple die places obstacles in the way of the snake and makes Fiesolix move faster on his own path. The snake's yellow die moves Salamamba through the forest to complete its tasks, but instead of simply moving forward, the snake grows by as many pieces as the number on the die. Additionally, the snake can shrink, if desired, or swap the location of its head and tail to turn around.