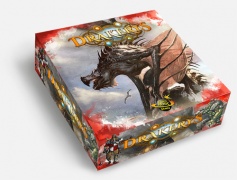 Drakerys is a fantasy world where Dwarves, Elves, Orcs and Humans reign over ancient kingdoms. Elemental magic created the world and went into slumber for centuries, leaving myths about dreadful and marvelous creatures ruling over the living. Everybody knows fairies and trolls are just stuff of legends, right? Wrong! A few weeks ago, an adventurer awoke a powerful dragon and triggered a chain of events leading to the destruction of an empire. Magic is returning in a world shaken by sudden chaos. Armies are assembling to repel the awakening creatures and seize power!

In Drakerys, each player chooses a side, gathers miniature troops and takes the lead against other players in story-driven skirmish battles. The terrain setting as well as the victory conditions are laid out by a battle scenario all players agreed upon. The fate of warriors is determined through combat rules and some rolls of dice. As a war leader, you’ll need tactical insight - and a bit of luck - to win!

The Starter Box contains everything you'll need to discover miniature games and enjoy Drakerys. Two armies are featured with fully assembled miniatures: the Human Paladins of Irosia and the wild Orcs of Ashral.

As the story begins, they are pitted against each other in a campaign to conquer a mysterious archipelago filled with danger, secrets about the magical events to come, not to mention countless treasures! The winning side will take an important advantage in the beginning war.

The old world is about to crumble. It’s a time of heroes. Will you be the king of tomorrow? Find out with Drakerys!

The game uses classic fantasy army building with an fresh twist: players use a special Action Wheel to determine whose turn is it to play and what units can do. The same player can play several times in a row or execute glorious feats at the price of increased risks, or use a more cautions approach to moving his army. This unforeseen game mechanic sets a new vision in fantasy gaming strategies.