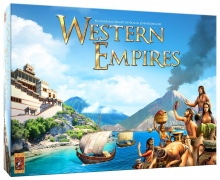 Western Empires is a board game for 5 to 9 players and covers the development of ancient civilizations over 8000 years of history. This is not just a regular game. Western Empires can take up to 12 hours to complete. And still yet, it has a simple mechanism and is easy to learn. The players lead their civilizations, as they expand and collapse, from the stone age, through the bronze age to the end of the iron age. Western Empires provides a full day of fun for larger groups. When combined with the future release Eastern Empires this can be expanded to a full game of 18 players: Mega Empires.

Culture
Western Empires is a not a wargame, as it may seem at first glance. Yes, war may be involved, but rather it is a game about history, culture, trade, development, and... calamities. Players develop their own unique civilization in arts, crafts, science, civics and religion. Each player starts his civilization with a single population token, 8000 BC, but grows and grows over time, and eventually cities can be built. Cities of course bring wealth and fortune, but also… problems like Epidemic, Famine, Earthquakes, Pirate attacks and Civil disorder.

Trading
This wealth is expressed in trade cards. The more cities, the more cards a player gets. These cards provide both trading commodities, and calamities. Trading is the heart of the game. A real social experience, where all players simultaneously trade with each other during a limited time. As soon as trading has ended, the players that end up with calamities will suffer them.

Develop advances
And then, of course, it’s time to do something about it. Build walls, give your citizens music and architecture. Develop religion, democracy, improve science… 51 different advances can be developed in five different categories.

Maybe a player can even construct a wonder of the world, or scatter their people all over the map, gain cultural ascendancy. The player that knows best how to work together, trade or battle for territory, defend his people against nature or enemies like barbarian hordes, and stand the test of times, eventually will win the game. After up to 12 hours of playing that is.