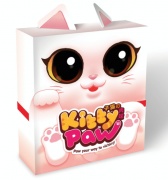 What happens when seven cats run into cardboard boxes? Well, a crazy game of kitty hide-and-seek!

Kitty Paw is a dexterity and reaction game. Players try to be the first to complete the kitty combinations shown on the Kitty cards to score victory points (VP). The player with the most VP in the end wins.

Each player gets one Kitty card in each round and tries to be the first to create the patterns shown on the cards. Since this is a recognize-and-react game, all players act simultaneously. In more detail: