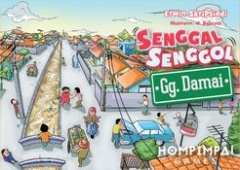 Welcome to Gang Damai (Peace Alley), a little street on a corner of Jakarta. Gang Damai has been just like a mini Indonesia, where people from Sabang to Merauke live together. With their houses almost hugging each other, living in Gang Damai is always full of color.