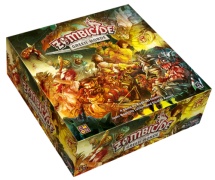 This sequel to the smash hit Zombicide: Black Plague will bring players back into a world of deadly medieval fantasy, this time filled with infected orcs and goblins who will put survivors to the ultimate test. This green menace is not only stronger than their human counterparts, but they also tend to gather into massive hordes that ambush the survivors when they least expect it. Uncover the many surprises the Green Horde has in store for you!

They were a brave people, living on the edge of the Orcish lands?on the Western frontier. It was a rough country, where nature grows wild, and the weather can change at a moment’s notice. They fought with the brutish Orcs many times, withstanding raids on their villages and fields. Never once, in all those battles, did they consider leaving for safer regions of the world. This was their land, their ancestor’s land. Generations had grown up in its green forests and fields, taking what the earth gave them, and defending what was theirs. But the Orcs were relentless, becoming bolder and bolder as time went on.

When the plague hit, it wasn’t long before the Orcs became infected. All it took was one bite, and the sickness spread through their ranks like wildfire. What the plague robbed the Orcs of in intelligence, agency, and personality, it replaced with a single-minded goal: destroy the living and feast on their flesh. The Orcs band together now, a pack, a horde. They travel the countryside, attacking the towns they come across, but now stealing some crops or a cow or two doesn’t suffice. They’re not satisfied until the people of the village are dead... or perhaps worse, undead.

Zombicide: Green Horde is coming to Kickstarter on May 30. It is the standalone sequel to Zombicide: Black Plague. Set in the same medieval era, players will take on the role of Survivors looking to defeat the shuffling, undead menace by any means possible.

In Green Horde, up to six players can join the battle for survival. They’ll combine forces and work cooperatively to accomplish their goals, and against all odds, stay alive. Fans of the Zombicide series have become familiar with the Walkers, Runners, Fatties, and Abominations that shuffle around, looking for victims. But the creatures they will face are not just zombie humans, they’re zombie orcs! The Survivors will have to gear up with a wide variety of medieval equipment if they hope to outlast these fearsome foes. Zombie Orcs are stronger than the classic zombie and represent a stiffer challenge to even seasoned undead-hunting veterans.

Orc Walkers used to be the grunt warriors of the Orcish tribes. Their intelligence is gone, but they retain their strength and ferocity in battle. Orc Fatties were the real strength of the tribes. Tougher than even the average Orc, battles with them should not be entered into lightly. The Runners in Zombicide: Green Horde were once goblins, the smaller cousins of Orcs. They are fast, unpredictable, and have retained their instincts for survival. Not much is known about the origins of the Orcish Abominations. However, there are two things that are certain: you’ll need to have a solid plan to destroy them, and you’ll need an escape route. As the different zombies are dispatched, the Survivors will earn experience points, unlocking abilities and better preparing them for the challenges they will face.

A new challenge for the Survivors is the Horde. It represents a growing group of Orc zombies that are ready to enter the board in an unexpected location and ambush the Survivors. As zombie cards with the Horde symbol are drawn, one extra zombie miniature of the same type is set aside, collectively forming the Horde. They will be locked into place until an “Enter the Horde!” card is drawn, spawning the Horde on the board. Any Survivor caught on their own near this roving menace would best beat a hasty retreat.

With such menacing new foes, the Survivors are going to have their hands full dealing with the Green Horde. Luckily, they’ll have some awesome new weapons and spells on their side to help combat the rotting masses. Things like the Lava Burst, the Norse Sword, and the Bone Kukri will all be helpful when hacking through a pack of the undead. Oh, and if they should gather together too tightly, the Survivors can always hit them with the catapult...(did we not mention the catapult?).

Zombicide: Green Horde includes ten new challenging quests, featuring some of the toughest scenarios a Survivor has ever had to face. With new terrain, like ledges and water holes, and the ever-present threat of the Green Horde making an appearance, the team will have to plan their routes carefully. Sometimes avoiding trouble is better than facing it head on! Zombicide: Green Horde is the next chapter in the ever-evolving world of Zombicide. There’s no rest for the Survivors if they hope to battle their way to a new hope and a new beginning.

Fans of the series will delight in the new challenges placed in front of them, but Zombicide: Green Horde is also a great introduction to the series. Even new players will be firing Spiked Bows or Telekinetic Blasts at the enemy in no time.

Strap on your armor, sharpen your sword, and prepare for adventure. Zombicide: Green Horde is coming to Kickstarter on May 30, and only the brave need apply.