Secret Weapons of the Third Reich 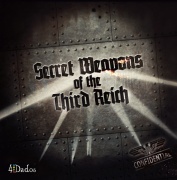 The date: March 1938. The vast majority of Austrians cheer the Anschluss of their country by the German Reich. Central Europe is falling into Nazi hands and all the best European scientists will soon compete under the aegis of Heinrich Himmler, for whom no scheme is too wild or too improbable — but which team has the imagination, the courage, and the drive to most successfully accomplish their goals?

Secret Weapons of the Third Reich is a game for one to four players simulating the arms race of World War II from the German perspective. From secret submarine bases in Greenland to the mysterious Base 211 in Neuschwabenland, Antarctica, this game recreates the incredible tales of Nazi technology, from the famous V-1 buzz bombs and V-2 rockets to the unlikely flying saucers derived from the work of Nikola Tesla. Will players be able to deliver the Haunebu project to completion? Will Hans Kammler escape with his last battalion of flying saucers to the dark side of the moon? Will the secret submarine fleet sail to Antarctica to pursue the war after the war? Or could German scientists produce an atomic bomb to be dropped on New York by an electro-gravitational flying saucer or within the warhead of a futuristic intercontinental V-3? Would it even be possible to build a huge solar satellite gun to strike America?

In the game, each player controls one or more research groups, each working on a secret weapon project. Each research group has a leading researcher, who provides an initial bonus (expressed in resource cubes or scientist cylinders) when the project is assigned. The researcher has a regime loyalty value that measures both the ability to make requisition attempts and the ability to resist opposing attempts.

A player tries to get their projects approved, then completed. Certain requirements (resource cubes and/or scientist cylinders and technologies attached to projects) must be met and costs paid in order to reach the stage of development of a project. Each turn, approved projects generate specific amounts of resource cubes as funding. Completed projects award victory points (VP) and allow, in most cases, weapon production. Produced weapons award VP to the owning player in addition to helping to achieve a cooperative goal for all players. In fact, if together the players fail to reach a certain number of weapons produced by the end of the game, they all lose. The weapon production goal varies depending on the number of players.

Play begins in 1938, one year before the outbreak of world war. At the start, players can only place research groups for their approved projects (project plants) in the portion of the map representing Germany and Austria. In 1939 and later, the conquests of Nazi Germany allow players to deploy their project plants in occupied European territories — but players will have to pay attention to the various locations because some areas allow only research and development, others only weapon production, and still others only research and development for U-Boat projects.

Also, players must operate in a "state of warfare". This means that as time goes on they are more and more subject to enemy bombardments that can cause a great loss of resources and technologies. In addition, as starting in 1943 Allied and Soviet advances on Berlin make the map progressively smaller, players must face logistical issues never encountered during the early years of the war.

Should a completed project or produced weapon fall into Allied hands, players not only lose VP, but the weapons production goal recedes as well! Thus a certain amount of player cooperation is a must. Each player must balance his personal interests with the common need to share technologies and resources in order to fulfill the common goal.

Last, but not least, via events one player may secretly become the turncoat, working in the shadows to help the enemy, and winning the game if all players would otherwise lose.