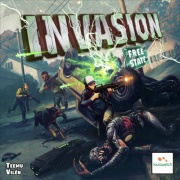 They might look alien to us, but they bleed. Believe me — I've seen it. I was sent here to tell you that all over the world people are arming themselves against the alien threat. You must do your part here in Maryland. We're few, but we can win this war — as long as we're united.

Keep your head down… caught in the open, you will be dead.

Inspired by such classic computer games as X-COM: UFO Defense and Laser Squad, Invasion: Free State is a competitive urban tactical combat board game for 2 to 4 players. In each mission, Alien and Resistance factions conduct combat against each other in a desolate district of Annapolis suburbs.

To win, you need to predict and avoid the enemy maneuvers with simultaneous initiative and action selection system. Use cover to your advantage and don't let them outflank you.

Endless variability is provided thanks to a modular board and the unique character selection system.