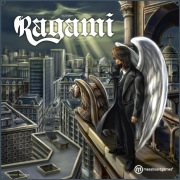 In all cultures there are mythical characters that protect people and help them to solve their problems. Those characters often take the human form with wings and we call them Guardian Angels or RAGAMI.

In this game, each player will play the role of a RAGAMI, winged human form, that travels around inside a city - the board. In this city, there are always people with problems, with their own internal conflicts, that need your help. There are also holy men and demons that can help or oppose to solving these conflicts.

But helping people to solve their conflicts is what worths more VPs, and for this you need to have Points of Strength. As many as the strength of the conflict you're trying to solve, which can go from 1 to 6. There are several ways to get Points of Strength: white cubes, cards, holy men, the help of another RAGAMI, or a die.

There are Action Dies (which allow to execute a certain number of actions, and it's placement will be made by the last player in the turn order) and there are Action Cards (that may be acquired during the game). In his play, Player can do one of the following actions: move his RAGAMI, move the holy men and the demons, pick cards or solve conflicts.

Game ends in the turn when the places of conflicts ends or when a player hit's the 30 points score mark.