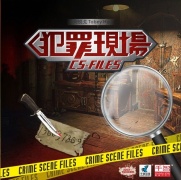 
There’s been a murder and nobody knows the killer’s identity. Time to open another CS-File (Crime Scene File)! You all arrive at the scene of the crime to find that the culprit has left important clues to solve the crime. With the collection of the suspicious objects scattered around, the investigators must deduce each and every possible means of the murder, striving for a speedy apprehension of the criminal.

While one of the players takes the role of a Forensic Chemist with a basic grasp on the “Key Evidence” and the “Means of Murder”, identifying and arresting the culprits are up to the efforts of the other players who play different Investigators. However, in this case, the murderer is actually one of the investigators, and there may be an accomplice among his fellows, which makes the investigation even trickier.

The forensic chemist will disclose the key information of the crime piece by piece. In order to deduce the murderer decisively, the other investigators must pay meticulous attention to the detail of the suspicious objects and the means of murder. Meanwhile, the murderer will craftily delude his fellows and mislead the investigation.

The brown cards are the clue cards, and the red cards are the means cards. With a brown card and a red card, the solution to the crime is formed. Can you figure out the correct combination?

Will the investigators be imaginatively enough and solve the crime successfully with collaborative effort, or will the culprit(s) accomplish the perfect crime and get off scot-free?

Murderer x1
When the crime takes place, the Murderer chooses 1 Evidence card and 1 Means card as the solution to the crime, namely the “Key Evidence” and “Means of Murder” respectively.

The Murderer tries his best to hide his role and look for a scapegoat. Even if he is identified, as long as no one can correctly resolve the “Key Evidence” AND “Means of Murder”, the Murderer is still considered as getting off scot-free and therefore wins the game.

Bear in mind that the Murderer (and the Accomplice, if playing) is among the Investigators. To prevent themselves from being the scapegoat, the Investigators also have to make an effort to defend their innocence.

Witness x1
The Witness can only be added if the Accomplice is in the game.
The Witness is also one of the Investigators. As he just saw the culprits leaving the crime scene, he can only recognise them without knowing exactly which of them is the Murderer, nor the solution to the crime.

If the Murderer is arrested but can identify the Witness, the Witness is considered to be killed. The Murderer and the Accomplice get away with murder and win the game.